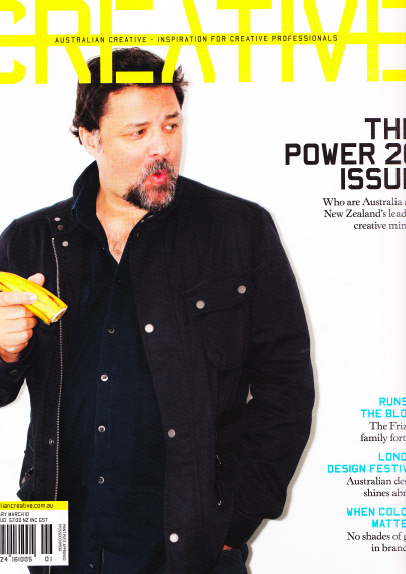 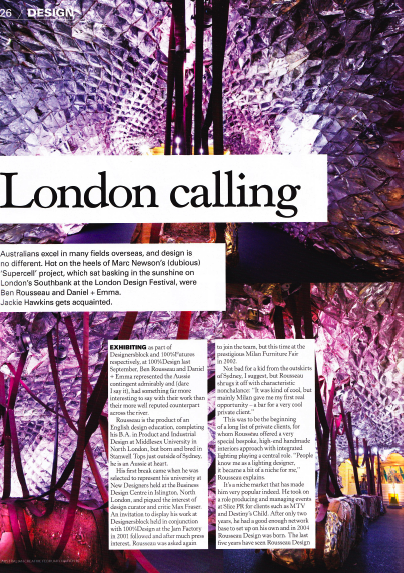 Australians excel in many fields overseas, and design is no different. Hot on the heels of Marc Newson’s (dubious) ‘Supercell’ project, which sat basking in the sunshine on London’s Southbank at the London Design Festival, were Ben Rousseau and Daniel + Emma. Jackie Hawkins gets acquainted.

Exhibiting as part of Designersblock and 100%Futures respectively, at 100%Design in September, Ben Rousseau and Daniel + Emma represented the Aussie contingent admirably and (dare I say it), had something far more interesting to say with their work than their more well reputed counterpart across the river.

Ben Rousseau is the product of an English design education, completing his B.A. in Product and Industrial Design at Middlesex University in North London, but born and bred in Stanwell Tops just outside of Sydney, he is an Aussie at heart. His first break came when he was selected to represent his university at ‘New Designers’ held at the Business Design Centre in Islington, North London and piqued the interest of design curator and critic, Max Fraser. An invitation to display his work at Designers’ Block held in conjunction with 100%Design at the Jam Factory in 2001 followed and after much press interest, Rousseau was asked again to join the team, but this time at the prestigious Milan Furniture Fair in 2002.

Not bad for a kid from the outskirts of Sydney, I suggest, but Rousseau shrugs it off with characteristic nonchalance: “It was kind of cool, but mainly Milan gave me my first real opportunity – a bar for a very cool private client.” This was to be the beginning of a long list of private clients, for whom Rousseau offered a very special bespoke, high-end handmade interiors approach with integrated lighting playing a central role. “People know me as a lighting designer, it became a bit of a niche for me,” Rousseau explains.

It’s a niche market that has made him very popular indeed. He took on a role producing and managing events at Slice PR for clients such as MTV and Destiny’s Child. After only two years, he built up a good enough network base to set up on his own and in 2004 Rousseau Design was born. The last five years has seen Rousseau Design build up an impressive portfolio of work and clients and all achieved through word-of-mouth referrals.

“Slice gave me access to nightclub owners and the like, those that could afford the sort of unusual high-end furniture I was making, and finding the manufacturers that could produce some of the unusual pieces was not something that happened overnight,” he says. “I gradually built-up my contacts, learning from the manufacturing industry as I went along, which meant that the skills I could offer my clients grew at the same time.”

Initial projects included producing stage sets and styling parties for Oakley and MTV’s Lil Jon and working on the European launch of the Xbox 360 where Rousseau created a bespoke gallery displaying customised consoles by 16 international artists, including Jamie Hewlett of the Gorillas.

Based in Acton, West London, a true Aussie enclave, Rousseau has a large workshop and team of around ten. Rising and shrinking in line with the workload, the team consists of skilled members from backgrounds as diverse as carpentry, set building and plumbing. This diversity of offer and flexible can-do attitude is partly what seems to have made Rousseau so popular. Recent projects have included the co-design and install of the new Glade Bar at Sketch, Mayfair alongside Mourad Mazouz and Christian De Falbe, the design and installation of themed rooms at the Ice Hotel in Jukkasjarvi in Arctic Sweden and every boy’s wet dream – the money-no-object interior design of Superbiker Troy Corser’s 40-ft Gulfstream Tourmaster.

But it is Wasted, a project conceived and curated by Arts Co, presented in a tunnel that connects the London underground and the V&A Museum, that has Rousseau the most energized at the moment. In conjunction with recent RCA Architecture graduate Ian Douglas-Jones, a vast architectural seating installation was created, using reclaimed materials that usually would end up in landfill – imported tea sacks and fire hose. This installation turned the ordinary into the extraordinary, recomposed and re-appropriated the tea sacks and hose formed an immersive jewel-like semiprecious environment.

“It really opened up my eyes to the amount of materials that are filling up the ground, there is only nine years left of landfill in the United Kingdom,” Rousseau explains. “Some of it is rubbish and you cannot do anything with it, but some of it, with a bit of imagination, could really create something.” He’s put his money where is mouth is too, setting up a new company called Wasted Design, to explore the idea of turning other reclaimed materials in to new products. “Conveyor belt off-cuts are super strong and perfect for garden furniture! I have stacks of ideas and it’s an area I am very excited by.” Watch this space.

I wonder, with all his enthusiasm for progressive manufacturing, whether we will see him on Australian shores again. “Yeah, I’m itching to come back, I would love to have a practice back in Australia. I’m aiming to come back within the next five years,” he says, but at the same time laments the inconvenience that this would cause: “London is, for me, the centre of everything, it is an international hub, and the manufacturing base in Europe is so close.” So, living back in Australia is really a lifestyle choice for Rousseau.

For Daniel + Emma though, it couldn’t be more different and living in Adelaide is a conscious decision to get away from the hustle of the biggest, brightest and the best, so they are ‘free’ to design unhindered by expectation and the fierce competition that London engenders. “In some respects it gives us a bit of an edge,” says Emma, one half of this young married couple. “You are not seeing the newest and greatest thing that so-and-so is creating. You are creating originality, because you are removed from it.”

Daniel + Emma are relatively new to the design scene but in their short years since graduation from the University of South Australia, Emma has won the Qantas Spirit of Youth Awards and awarded an internship with Marc Newson in Paris, while Daniel worked at Committee, the studio in Deptford in Southeast London famed for its quirky Kebab lamps. Helped along by a grant from the Government of South Australia, Daniel + Emma have exhibited at 100%Design Tokyo and 100%Design in London in 2008, with their range ‘Shapes’ and last year with their collection ‘SOLID’.

Taking pleasure in ordinary everyday things ‘SOLID’ has made the humble object, be it torch, wall clock or pencil box, remain humble, yet with better lines and subtlety of texture and colour. Designed to appeal to a broader spectrum of people than just your usual design-savvy types, Daniel + Emma delight in the less showy aspects of design, resisting the trend to dramatize and embellish what can be left simple and uncomplicated. Daniel + Emma are not out to change the world, they are here to make the objects around us a little more refined, considered and thoughtful.

Moving overseas, even for just a short while, was as with Rousseau, always an eventuality for them. “Our degree was very engineering focused and you were expected to go on and work for a large company and pack off your products to get mass manufactured in China, Daniel and I weren’t interested in that. We wanted to break away and be more independent designer-makers,” says Emma. “Working in London gave us that experience and helped us realise not just how to design in that way, but how to make a business out of it.” Along with the new skills learnt in London, came excellent contacts. Retailers and distributors have expressed interest in SOLID and manufacturing is due to commence early 2010, and in Australia if Emma has her way.

Remaining in Adelaide for the foreseeable future but for forays to Sydney in February to take part in the Australian Design Museum Show at the Shapiro Gallery and Melbourne to show off new work at SPACE furniture, Daniel + Emma like to keep it that way. Working in a Mental Health organization by day for Emma, a lighting shop for Daniel, they made a conscious decision not to work in a design/engineering environment. “To go there everyday would be draining and demanding and makes doing your own design work so much harder,” says Daniel. “This way, we come home and sit down to design and it makes it all the more enjoyable.”

Don’t be mistaken for thinking them luddite however, they don’t design in a bubble and are regularly in touch with what’s going on in the greater outside design world, they just choose not to be conventionally immersed in it. Shortlisted for the Bombay Sapphire Design Discovery Award in 2009 and with a new collection for 100%Design in London and Tokyo in 2010, they seem to be rather successful at it.