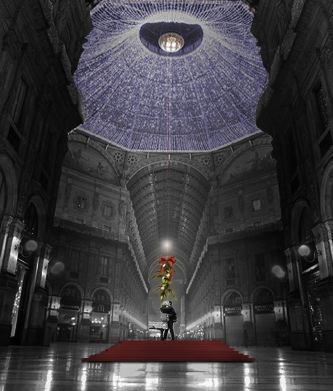 During December, the city of Milan will light up thanks to a number of light installations realised by internationally renowned designers. Developing an idea of staging intimate encounters in the public sphere, Paul Cocksedge Studio will create an installation that reinvents the ancient European tradition of kissing under a mistletoe and transforms it into an act of charity.

The installation KISS will consist of a huge led canopy hanging above a stage from the centre dome of Galleria Vittorio Emanuele II and a large mistletoe. When couples move up to the stage and allow their lips to meet, their kiss sparks a charge that instantly activates a light sequence in the led canopy, changing the colour in varying intensity, ultimately forming numbers in the sum of kisses given under the mistletoe. Each time this occurs, in spirit of the Christmas season, the sponsor UBI Banca, will donate one Euro to CESVI, helping ease the hunger in North Uganda.